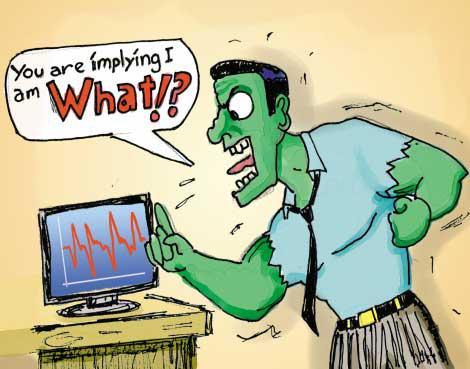 At this point, all this may sound trivial and tautological to you, for isn’t the meaning of “volatility” in Black-Scholes precisely the number that you should use in the formula, both for the pricing and the hedging? And could therefore be any question that this number should be used in the algorithm to compute the hedge and no other? Actually, the answer is far from clear, for you might legitimately wonder, given that hedging is not just the formal argument used in the formal derivation of Black-Scholes but has, among other material consequences, well, hedging, and the corresponding course of action that will unfold in time, whether real volatility will actually turn out to be the same as implied. For surely we don’t live in the world described by Black-Scholes; and this is no accident, for isn’t the true purpose of option trading, consequently of “implied volatility,” to detect discrepancies in the market prices of options and try to make some money by buying or selling these options; that is to say, by arbitraging their prices against what will turn out to be their “true value”? And isn’t this true value the reflection of the cost of the actual dynamic hedging that will ensue?

What I am suggesting here is that “implied volatility” is mainly a trading concept. For instance it can be taught in an option trading school and we can try and picture the consequences of such a teaching and such a program, i.e. the subsequent rule of action, the subsequent disciplined behavior. As a trading concept, implied volatility says: “From now on, you shall go and find in the option market itself, the answer to the question about that unobservable parameter that goes in the Black-Scholes equation.” A lot is involved in that single step, not least among which the admission that the market may indeed act as an independent physical reality that we may confront with our theory and calibrate our theoretical model against.

The Volatility Smile Problem: From Within

21 August 2019 Editor Articles, Ito 33, Partners Comments Off on The Volatility Smile Problem: From Within

“The Minimum of the Smile Fit is Not Even in The Market!”

21 April 2020 Editor News Comments Off on “The Minimum of the Smile Fit is Not Even in The Market!”

Uwe Wystup, well known to Wilmott Magazine readers for his FX column, recently spared some time to catch us up on current developments in the FX space from a quantitative perspective. Late February through March […]

Which Free Lunch Would You Like Today, Sir?: Delta Hedging, Volatility Arbitrage and Optimal Portfolios

23 October 2019 Editor Wilmott Inner Circle Comments Off on Which Free Lunch Would You Like Today, Sir?: Delta Hedging, Volatility Arbitrage and Optimal Portfolios

Wilmott > Articles > What is Implied by Implied Volatility?