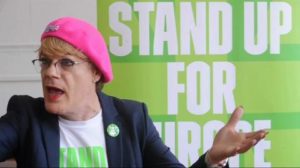 A big, big thank you from those of us who wanted out of the EU to:

Lord Stuart Rose, leader of the Remain camp, for his timely confession

David Cameron, for his forecast of imminent nuclear war. Is it safe to come out of my bunker yet?

Barack Obama, for his ignorant threats

Jeremy Corbyn, we give you ten out of ten for your enthusiasm

George Osborne, for his bully-boy budget

Eddie Izzard, for…well, just being himself…and in a pink beret

And last but not least, thank you, thank you to Sir Bob Geldof. We could not have done it without your totally inappropriate, ill-judged, and downright offensive behaviour

There are many, many more of you who do not understand the British character and the issues that worry the British working class. To each and everyone of you I raise my glass.

Back Of The Queue, Mr President?

Shortly after the Queen’s 90th birthday, and the day before St George’s Day and the 400th anniversary of the death of Shakespeare, Barack Obama visits the UK and makes open threats about trade between the […]

I’m relatively rich. I can afford private healthcare. I don’t have to worry about long waiting lists for operations or the impossibility of getting an appointment with my GP. If I or my rich friends […]

Gosh, this is embarrassing. I seem to have done the double. This is a sequel to my blog from last year How I Successfully Forecast The Results Of The UK General Election. A few days […]

Wilmott > Blogs > Paul's Blog > Sir Bob Geldof, We Who Are About To Thrive Salute You!