A few times in every generation a person comes along that makes a significant impact on the world.  Rare or lucky are those that can do this. And then there are those that can impact the world in more than one field as if it was just another day at the office.  Ed Thorp is one of those very special minds, and he has done this with ease, grace and a calm and confident demeanor for the better part of 60 years.  For those that don’t know, Professor Thorp was one of the original Wall Street Quants that got his start in a very atypical fashion – casino gambling.  In his new book A Man For All Markets, released Jan 24, 2017, Thorp chronicles his whirl-wind life and gives a full and complete answer to the question “How did you do it?”

In 1962 Thorp published his first book, Beat the Dealer. It was the first widely distributed publication that gave a purely mathematical derivation on how a player could beat the casino at the game of 21.  This book started the revolution of Advantage Play – the practice where people reverse engineer games of chance for profit. It is considered by many in gaming as one of the most influential books in advantage gaming history. As professor Thorp stated, “I dropped a pebble into the ocean, and it started a tidal wave.”

Thorp’s original work on beating blackjack paved the way for inquisitive minds to think of new and clever ways to attack casino games for profit.  Every year professional gambling’s most successful players converge on Las Vegas to attend Max Rubin’s Blackjack Ball.  The gala is hosted by long-time organizer and advantage-gaming legend Max Rubin.  Every attendee has beaten the casinos at their own games; in most instances for several millions of dollars.

Every advantage player owes there start in one way or another to Professor Thorp.  As long-time player and gaming author Henry Tamburin puts it, “For me to say that I owe my successful blackjack playing career to Dr Thorp would be an understatement. I’m not alone in forever being grateful to him for his intellect, research, and dedication to discover a mathematically accurate way to beat the casinos at their own game.”  Henry is author of the Ultimate Blackjack Strategy Guide that he published at the 888casino website.

Blackjack lobbies all over the internet use the conclusions derived from Beat the Dealer to help players improve on their own gaming strategies.  To one extent or another Thorp’s analysis can be applied to every version of blackjack.

This accomplishment would be the crowning achievement of any person’s career.  Yet, Ed Thorp has many equally impressive accomplishments, most of them under the radar. Thorp and father of information theory, Claude Shannon, developed the world’s first wearable computer, used to beat the game of roulette.  Thorp and Shannon developed the device while both were on faculty at the prestigious Massachusetts Institute of Technology (MIT).

Thorp’s early achievements in probability and predictive analytics provided the foundation for his equally earth shaking work in the stock market.

In the late 1960s Thorp took his understanding of probability and statistics to the biggest casino in the world, Wall Street.  His main focus was identifying pricing anomalies in the securities market. Using his original research in the world of high finance, Thorp helped launch the first quantitative market-neutral hedge fund in 1969. His concepts were also central to the creation of the derivatives market.

In his new book, Thorp puts forth a comparative analysis between casinos and Wall Street, where he concludes that gambling is a simplified version of investing, and explains how it’s possible to apply the same logic to both. Perhaps the biggest difference is that when you excel at making money in the stock market the “House” can’t ban you.

Thorp provides a thorough discussion of the risk involved in both endeavors. He predicted the dangers of Long Term Capital Management, even foreseeing the Madoff debacle almost two decades before it happened. Where others saw opportunity for financial windfalls, Thorp saw extreme risk, and the potential for fraud.

Thorp’s clients have been very happy over the years with his analytical approach to investing. In 1998 Thorp released a public statement stating that his personal investments have yielded in annualized 20% rate of return averaged over 28.5 years.  A number which one can safely assume is in the neighborhood of his assets under management portfolio.

Ed Thorp was honored at the 2017 Blackjack Ball. There he gave a speech where he discussed his truly remarkable life, and how it started with a trip to Las Vegas in the 1950s.  In a conversation with me, he elaborated on how remarkable his journey has been, and how supportive his wife Vivian was in all of his endeavors until her death in 2011.

His life has come full circle.  It all started on an off chance visit to Las Vegas decades ago, and now his story, and the lessons that he has learned is available for all to enjoy, admire and perhaps to be used as a guide for those that are on their own path to induce change.

At its core, A Man For All Markets is a personal look at the predictability of chance and how to walk the tightrope between risk and return.  It’s a must read for anyone who wants a look into the mind of an out of the box thinker who has made a significant impact on the world in so many areas. 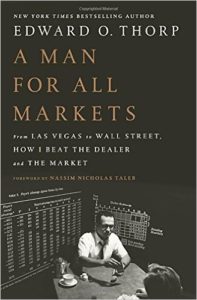 Buy this No. 1 Bestseller NOW on Amazon!

What I Knew And When I Knew It: Part I

28 February 2018 Editor Wilmott Inner Circle Comments Off on What I Knew And When I Knew It: Part I