One of the supposed silver linings of our recent economic disaster was the idea that we finally understood how hazardous our exotic financial instruments are and that bankers were finding a better way to “manage” that risk. But if at least one of the common practices in banking is anything to go by, risk-management procedures in many cases continue to hide the very dangers they are trying to measure.

This may result in banks taking bigger positions, and end up taking more real risk than they should. And it gets worse.

The practice in question goes by the name of “calibration,” which is best described using a non-financial example.

Springs are the basis for simple weighing machines. Attach a weight to the end of a spring and it will stretch. Measure how much the spring stretches. Repeat using a different weight. You will find that the extension is proportional to the weight. (Up to a certain point. If the weight is too great this relationship breaks down, and the spring may not even return to its rest state.)

This relationship is named Hooke’s Law after the English scientist who described it in the 17th century, Robert Hooke. F=kx, where F is the force or weight, x is the extension of the spring and k is some constant. To use this in practice, just attach a known weight to the spring and measure its extension. You know F, you know x, you can then infer the k. This is calibration. Once you know k, you can weigh anything else, take the extension and multiply by k and hey presto!

Now let’s see how this idea is applied in finance.

Your goal is to value some complex financial structured product. You have a valuation model with lots of lovely mathematics. But the model requires the input of parameters. You may need volatility, probability of default and other numbers, depending on the model and the instrument. A collateralized-debt obligation, for example, would require the input of lots of default parameters. Yet those parameters are for future volatility, future default risk and so on. How can we possibly know what these parameters are?

So where’s the harm?

The beauty of Hooke’s model is that whatever weights are used to calibrate the spring, you get the same k. The stability of the parameter is a sign of a good model. This doesn’t happen in finance. You calibrate your derivatives one day, and then come back a week later to find your parameters have changed. This indicates the model is wrong. If finance were a proper science, then this simple and blatant failure of the model would result in it being tossed out and require a trip back to the drawing board.

In the context of the CDO, we might get information about the probability of default of the individual companies making up the instrument by looking at the credit-default swaps for those companies. But how much real information can there be in those CDS prices, especially since the company in question hasn’t yet, by definition, gone bankrupt and therefore the statistical sample size is zero?

You can see where I’m heading with this. Finance doesn’t meet the basic requirement of science: repeatable results. The models aren’t capable of any great level of precision. In finance, when models are calibrated, they always have to be recalibrated a week later. But those parameters are supposed to remain fixed for evermore. If they have to be changed, then the model either was wrong before, is wrong now, or more likely both.

I’m not saying that we’ll ever find a perfect finance model, but we should be aware of the limitations — that is to say the model error — of whatever model we do use. And by calibrating we throw out all objective measure of model risk. Risk has been very effectively hidden.

An objective test of the accuracy of a model is how well the theoretical value matches market prices for traded instruments. And in a calibrated model it does that perfectly, but it only appears correct at that one instant in time. And that appearance is very deceptive. Next week, or even tomorrow, or just an hour later, theory and practice will inevitably diverge. But if you are forever recalibrating, you never see this. Yet the very act of recalibration negates the model value that you thought was correct. Hence my comment that appearances can be deceptive. The value wasn’t even correct at that one original instant.

Recalibration means that risk managers remain in blissful ignorance of the errors in their model and hence the risk. If anything ever gave a false sense of security, this is it. All that risk management has done is to hide the risk, making it harder to spot, to estimate and to hedge.

I visited a regulator (who shall remain nameless) in Washington recently. People say that regulators don’t have enough bite, so I went there to offer a set of teeth. My goal was to arm them with one simple, surefire way to frighten the pants off any bank. My advice was to ask the banks one simple question: “So, how stable are your calibrated parameters?” The bankers would then find some respect for the regulators. Instead, I found myself surrounded by quants praising calibration, not even appreciating the negating effect of recalibration.

It doesn’t take a rocket scientist to figure out the fallacy in calibration, but it does take someone who can look beyond the math. 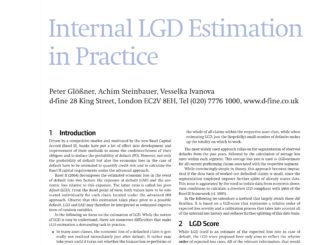 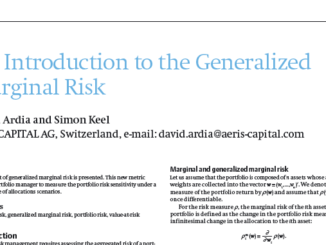 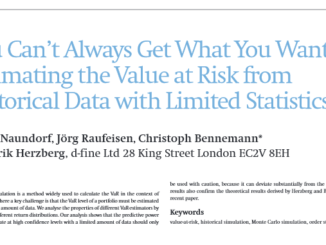 You Can’t Always Get What You Want – Estimating the Value at Risk from Historical Data with Limited Statistics – Björn Naundorf, Jörg Raufeisen, Christoph Bennemann & Frederik Herzberg