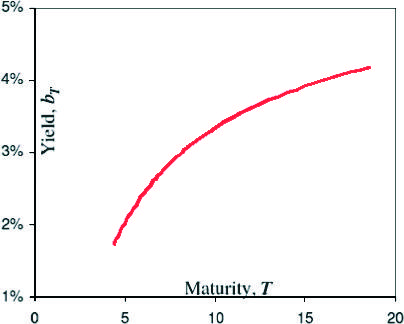 An intuitive model for the yield curve, based on the notion of value-at-risk, is presented. It leads to interest rates that hedge against potential losses incurred from holding an underlying risky security until maturity. This result is also shown to tie in directly with the Capital Asset Pricing Model via the Sharpe Ratio. The conclusion here is that the normal yield curve can be characterized by a constant Sharpe Ratio, non-dimensionalized with respect to √T, where T is the bond maturity.

Among other features of the model are that it is able to explain, qualitatively if not quantitatively, the existence of (1) a normal yield curve at times of “normal economic growth”, (2) an inverted curve during periods of “high uncertainty”, “high interest rates” or “low economic growth”,1 (3) a flat yield curve in more certain times and (4) a liquidity trap when economic growth is expected to be negative.

6 May 2020 Editor Articles, Ito 33, Partners Comments Off on Implied Probability of Bail-In

CoCo (Contingent Convertible) or AT1 (Additional Tier 1) Bonds have been receiving some attention recently due to a confluence of factors. In no particular order these include the fact that $40bn worth of contracts are […]

You Can’t Always Get What You Want – Estimating the Value at Risk from Historical Data with Limited Statistics – Björn Naundorf, Jörg Raufeisen, Christoph Bennemann & Frederik Herzberg

Wilmott > Articles > A VaR-based Model for the Yield Curve